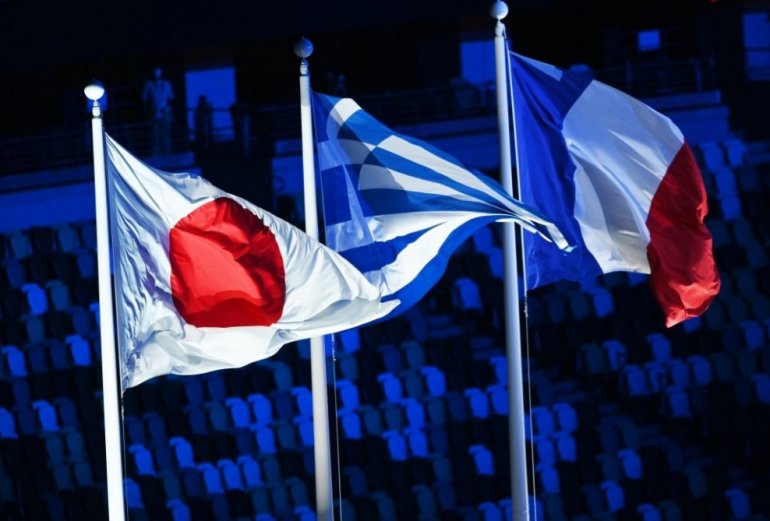 The 2020 Tokyo Olympics, which began without spectators on July 23 due to coronavirus, concluded with a closing ceremony on Sunday, according to Anadolu Agency.

During the ceremony, which was held without fans, athletes carried flags from all countries to the center of the field.

The athletes, who did not leave Tokyo after their competitions, came to the field and participated in the closing event.

The Olympic Stadium also hosted a spectacular fireworks show, concerts, and parades. Volunteers working during the Games were also given the plaques.

The Olympic flag was passed to France as the next Olympics will be held in Paris in 2024.

Tokyo Governor Yuriko Koike handed over the Olympic flag to International Olympic Committee (IOC) President Thomas Bach, who then passed it on to Anne Hidalgo, the mayor of Paris for the 2024 Games.

After the handover ceremony, the national anthem of France was played, and the introduction film of the Paris Games was projected on the stadium's screens.

Bach took the podium with medalists from every continent to deliver a speech, congratulating the athletes who fought with the unifying power of sports.

"For the first time since the pandemic began, the entire world came together. Sport returned to center stage. Billions of people around the globe were united by emotion, sharing moments of joy and inspiration. This gives us hope. This gives us faith in the future," he said.

"You, the best athletes of the world, could only make your Olympic dream come true because Japan prepared the stage for you to shine."

The Olympic closing ceremony ended after the Tokyo Olympic flame was extinguished.